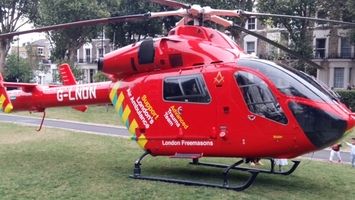 Members of the Chapter are very proud of their support for the new London Air Ambulance helicopter "Walter", which entered service in 2016, having been half-funded by London Freemasons, and half-funded by public subscription.

Walter, who now works alongside the previously existing helicopter "Rowan", has already been seen in action by many members of the Chapter, but we believe that the closest encounter has been with Barrie, one of our members, who found Walter sitting in a public park at the end of his road one evening in September 2016, and even had a chance to chat with the pilot.

The photograph was taken by Barrie, and shows Walter waiting patiently whilst his crew go about their work, before returning to the skies to continue providing protection to London's residents.
​ (Please click on the image to make it larger.)

FROM LONDON TO PARIS, WITH LOVE 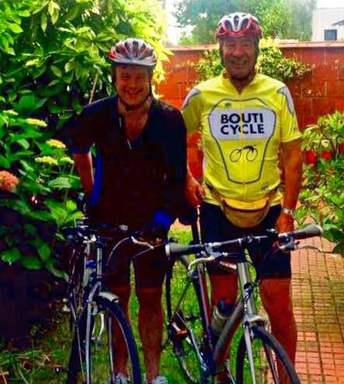 It was a gentle journey of sorts.

It involved being gifted water by a gypsy family on the hot juncture where countryside meets the foothills of the Parisian conurbation.

It involved being spat on by a driver in that city's disaffected, poor banlieues.

And in Beauvais, passing a night on my road from London, an Edinburgh gentleman, William Laughton, dredged forth his bicycle to crest the first hill with me--the morning after he and his French bride greeted me with Islay whiskies and cheeses which were slightly more local.

I'd pedaled off on the Wednesday, to swap the Crystal Palace Transmitter for the Eiffel Tower, for a London Air Ambulance I hoped not to need on the way.

All this was in memory of two friends who died in the past year.  Both were lovely chaps who will be fondly remembered for quite a run of time. (One, Professor Merton Sandler, was known in medicine and elsewhere as a pioneer within his subject of brain biochemistry; his obituary in the Guardian is here.)

I began with breakneck scamper, atop a Ridgeback Voyage tourer named Herman, to cycle to the sea and set sail--catching by a trice the 11:00 pm Newhaven-Dieppe ferry, planning a few hours' sleep in the Channel which aboard the roar and heave of the actual MV Seven Sisters did not quite transpire.

In Normandy, as I cycled a disused rail path beginning in Arques-la-Bataille, almost every last local I passed paused to say hullo. (I paused too, but for twenty minutes' sleep on a park bench.)

Having been accustomed to cycle and run through gentle English and Celtic mists, I was fervently and Gallically sunkissed on the D927 through la Picardie. (Irish skin and sun sum up to bad news.)

I had hurled myself before on the kindness of unknown locals—advancing from Land's End to John o' Groats as a journeyman bicyclist, and the year after, running from the top of Ireland at Malin (you see, reader, downhill!) to its rump in Mizen.

Each time I inflicted myself on kindly, long-suffering strangers' sofas a remarkably consistent twelve hours after I'd intended to appear. To their credit, they each opened up their door to me, guided perhaps by a morbid curiosity, at 4 or 5 o'clock in the morning, and – as much their interest as mine – showing me the way to their shower, quickly tempting their washing machine to an unforeseen nocturnal kit wash.

For my Malin-Mizen run, I engaged a sports psychologist. By 'engaged', I mean 'and also married'; and 'sports', I simply made up. On Day 10, having entered the hinterlands of the (it turns out) vast rebel county of Cork, I rang my sports psychologist, to point out the road had disappeared, or at least narrowed to a ponytrack, the lorries were giving me no corner and instead wished to cuddle, and the weather had reverted to Irish-default. My sports psychologist, thinking, said 'close your eyes and imagine you are thirsty in the midst of a desert; then open them, and you lucky devil, you're in Ireland!'

This time I kept Caroline on speed dial.

Reaching on Friday a city consumed by strike, I arced off the Boulevard Pereire on to the Rue de Saussure in the capital's northwest, then the gentle right to the Rue de Pisan.

There a few kindly French people, and visitors from London and Sweden, had gathered to greet me at my finish line and rush me—possibly not entirely early—in for a meeting and restorative champagne and dinner served with Gallic aplomb.

Over dinner I remarked how happy we in Britain were to have nearby such close cousins, with whom we share so much of our language, our mediaeval heritage (including the guilds which became livery), and that we would not be complete without them.

This, anyhow, is what I meant to say. Bear in mind I was speaking in French—so I might well have said I was an octopus.

But they were gracious, toasting the Queen and also the President of Ireland. I ate with hands possibly just a smidge swollen; a side effect of hanging on for dear life.

In Paris digs were promptly found for me by a Young Stationer, Sophie Defrance, the rare books librarian of the Cambridge University Library, who shaking her mobile slightly was able to conjure a sunny, empty flat in the 6th arrondissement, on la rue Saint-Sulpice.

All this called to mind mediaeval pilgrimage, a perambulation less akin to RyanAir than to the writings of Sir Patrick Leigh Fermor, or perhaps a wandering compagnon (the French use this to describe, even today, a journeyman artisan travelling and living communally within the compagnonnage of the Tour de France) who seeks to become a master.

My personal fundraising, www.virginmoneygiving.com/air-ambulance-cycle, is now midway to its goal.  The £4-million campaign to purchase a second air ambulance for London has been covered amply in the press. (There has been a wonderful story in the BBC, here.)

And strapped sweltering to a heavy Herman, I thought of supportive compagnons in Paris and afar, and sharing yarns of misadventure from the dusty route intertwining London and Paris, a tale of two cities.

Because, compagnons, we'll always have Paris.